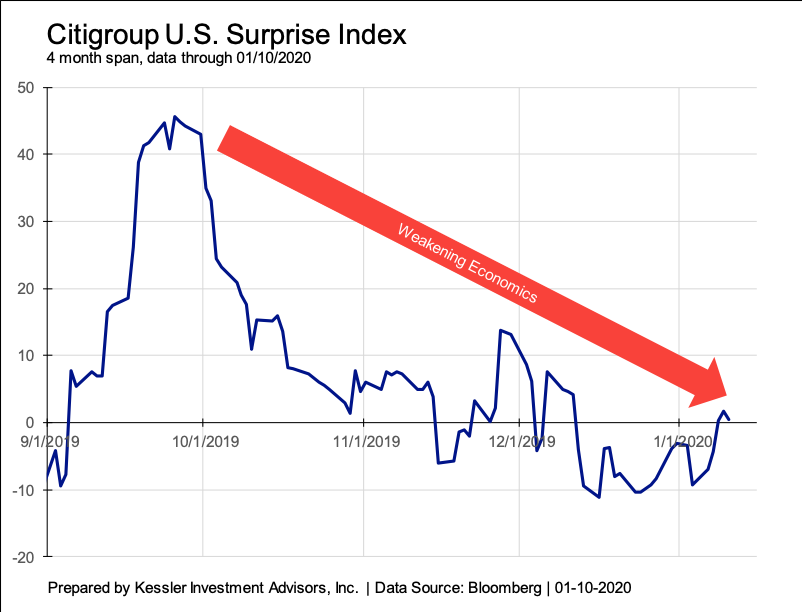 Hickman: A Recession Is More Likely Than You Think

Authored by Eric Hickman via AdvisorPerspectives.com,

Good economic news over the last couple months belies the fact that a recession could strike as soon as March 2020.

That good news has been plentiful: a phase one trade deal between the U.S. and China is presumably close to being signed, the December U.S. Labor jobs report exceeded expectations, the Federal Reserve didn’t lower rates at their December meeting, and developed-economy stock markets continue making new highs. The Fed’s mantra of, “the economy is in a good place” is the ethos of the moment.

But just behind those data points, many more are suggesting a deteriorating economy. The Citigroup U.S. Surprise index (which measures how far the aggregate of economic releases are above or below where economists estimate them to be) has fallen in recent months (see below). ISM Manufacturing, Durable Goods, Retail Sales, Leading Economic Indicators, and Existing Home Sales have all been lower than expectations in December and early January.

And yet the Fed repeats a version of the statement, “the economy is doing well because consumer spending and the labor market are …read more